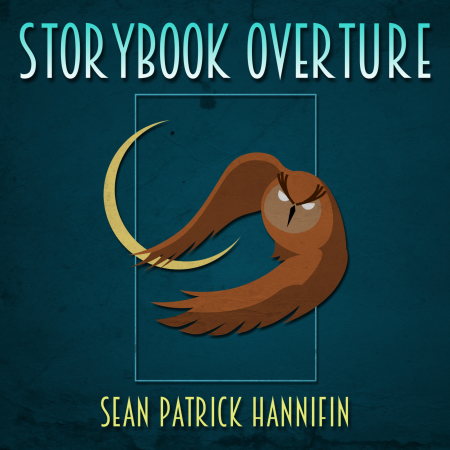 Yesterday I released my new album, Storybook Overture, into the wild, where it can be free and roam the mountains and valleys of magical [monetary] possibilities. It’s on bandcamp here. (You might see that I changed the cover ever so slightly, giving the background a bit of a gradient so it’s not so flat. I’m no great artist.)

At first a bandcamp release was all I had planned for, but on their uploading page they recommended DistroKid (that’s a referral link; you get 7% off, and I get a few bucks!) for getting into digital stores like iTunes, Spotify, Amazon MP3, etc. It looks like DistroKid has been around for a few years, but I had somehow never heard of them. I had used CD Baby for Voyage of the Dream Maker. CD Baby charges you a fee for each album you want to release and takes a small royalty on any income you make, the trade-off being that you never have to pay them again after the album’s set-up fee.

DistroKid, on the other hand, charges you $20 per year (for a single artist), takes no royalty at all, and allows you to upload as many albums as you want in that year. The trade-off here is that if you don’t pay another $20 next year (assuming they don’t bump up the price), your albums might be removed from the online stores. Granted, if you’re not making at least $20 a year from your releases, that’s not much of a loss. And $20 is cheaper than CD Baby’s set-up fee for a single album (and TuneCore’s prices are just awful; I’m not sure why anyone uses them).

So I decided DistroKid would be worth a try, especially since the $20 also allowed me to upload my 2014 EP, A Dream Half Lost, for no extra cost. I also hope to release at least one album in 2017. So I’ll just have to see if I can recoup that $20 within a year… and every year following, I guess, at least until I’m not so broke that it matters. This will mainly depend on people actually buying the album through iTunes or Amazon or wherever; streams make such little money, I’ll be lucky to make a few dollars. For comparison, in the last year I’ve made almost $18 through CD Baby for Voyage of the Dream Maker. That’s one half from one full album purchase and two single track purchases, and the other half from a bunch of little streams. So, if CD Baby didn’t take a small percentage, a year’s worth of revenue might just barely cover my DistroKid cost. Of course, that’s for a six year old album that’s also on bandcamp, so maybe not the best comparison. Point is, at my current level with my sort of music, paying $20 a year is still a significant cost to consider.

Anyway, if you search for them, you’ll find the album is already on iTunes and Amazon! That’s some fast distribution. (Still waiting on Spotify.)

Also, I uploaded the tracks and artwork to CreateSpace to try their CD-R service. Still awaiting approval for now. They’re a bit more expensive than Kunaki, but I think their CD-Rs also look nicer, plus they handle all distribution through Amazon themselves, so no need to worry about that. And anyway, all those expenses are passed on to whomever buys the CD. I think I listed the price at $10.99. If anyone buys the CD through Amazon, my share would only be $1.09. All the rest goes to CreateSpace and Amazon. (CreateSpace is owned by Amazon, but they’re still a separate company, so when you buy through Amazon, Amazon takes a fee on top of CreateSpace’s production costs.) Terrible margins. But better than nothing at all. Anyway, I look forward to seeing how it turns out.

So… that’s that! Feels great to finally have released a new album.

Patreon has helped a lot; knowing there are people out there not just looking forward to new material but willing to actually part with some money to support it has been very encouraging. A huge thank you to my Patreon supporters!