Checking off some items from the to-do list mentioned in my previous post, my OpenGL GUI panels can now have rounded corners (although they still need a bit of work as they’re not quite as circular as I’d like), they can have shadows of arbitrary size and color, they can have linear and radial gradient coloring, and the text dynamically word-wraps as necessary, with the scroll bar appearing only when needed.

Ain’t that nice? Next I need to work on vertical resizing and making sure multiple panels will overlap correctly when on the screen; a panel should be brought to the front “layer” when clicked on.

Then I will move on to adding the GUI elements I mentioned in the last post.

A fellow programmer on twitch mentioned a GUI library for LWJGL the he had programmed called legui. Looks quite nice so I might play around with it and see if I can integrate any of it with my panels. Another advantage of streaming on twitch: meeting other programmers and discovering new things!

(P.S. I don’t really know if this is my third week of working on it or not, but it’s probably around there. The title of this post is a reference to a film in which people carry in the banner.)

I’ve been continuing my efforts to program a custom simple 2D/3D engine in Java with OpenGL with which to create a more user-friendly standalone version of my MIDI animator (and hopefully some games in the future). Lately I’ve been focusing on creating a GUI system. In terms of free open-source 3D engines in Java, I don’t much like most of the GUI implementations, so creating my own has been fun. Granted, I still run in to bugs that are tricky to fix while trying to accomplish relatively simple things, but trying to solve such problems is educational and always a bit addicting, like solving a puzzle, especially as I’m doing it for myself.

So here’s my latest progress update. I’ve settled on using STBTT (included in lwjgl) font rendering for the GUI text and the underutilized Nvidia path rendering (included in OpenGL in general) for the panels (and hopefully more in the future, including possible note shapes in the actual MIDI animator). The panels are movable and can contain an arbitrary amount of word-wrapped text. You can scroll through the text, and the panel can include a y-axis scrollbar of arbitrary size. You’ll also notice that the text fades in and out at the top and bottom, a nice little touch in my opinion that I probably spent too long programming: 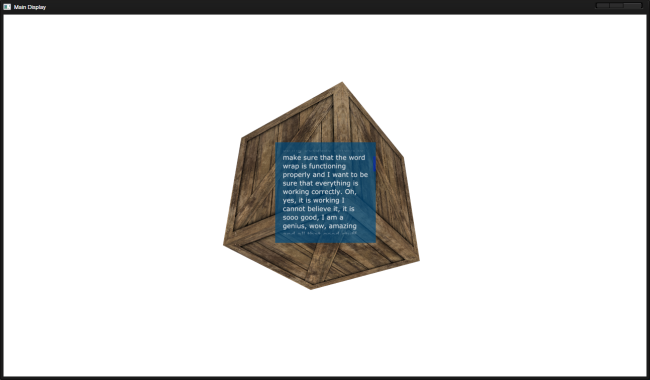 I’ve also been streaming my programming efforts on twitch, which is also addicting. It turns what is usually a pretty solitary activity into something at least a little more social, and it’s fun watching the viewer count tick up now and then. Shout out to twitch user Subtixx who has even offered helpful points and advice allowing me to fix problems my eyes don’t catch (such as null-checking the darn scrollbar!); many thanks Subtixx!

My current to-do list includes (but is not limited to):

So there’s still quite a bit to do. But I must do it, for this is my quest.

In other unrelated news, a 4th album from symphonic / power metal band Ancient Bards is finally happening! I love this band and I can’t wait for their new album!

Hey, look! I finally updated this blog’s theme! I think I like it better. Might do some more experimenting with the font, but this should work for now.

Anyway, I’ve been enjoying streaming on Twitch, and I recently finished playing the PC game Little Nightmares, a small little adventure game with a nice creepy atmosphere. It doesn’t take long to beat. My first time playing through, it took my a bit over 4 hours. Rushing through it a second time, I was able to speed through it in 1.5 hours, which I recorded for my records, because I’m sure I will want to go back and watch myself playing twenty or so years from now:

For now, I’ve moved on to playing the bright cheery anime-ish RPG Ni No Kuni II: Revenant Kingdom, which is perhaps meant for a younger audience with its super happy cheerfulness and ridiculously simple portrayal of monarchy establishment, but I must admit that I do love the art and style of the game with its amazingly beautiful cel-shading, and Joe Hisaishi’s orchestral score is fantastic, quite on par with his Studio Ghibli work. I wish they’d port the original Ni No Kuni game for PC, as I don’t have a PS3 and probably won’t be buying one anytime soon.

Although I can’t even remember when I created a twitch account, I never actually tried streaming from it until this week, streaming a bit of a creepy puzzle / adventure game called Little Nightmares. Here’s my twitch account. And here’s an attempt at embedding the channel:

Probably won’t actually use it much, as I don’t play video games as much as I’d like to, but as I finally have a graphics card capable of streaming, I might as well use it. Maybe I’ll stream some coding sometime as well, because that’s always really exciting.

Haven’t blogged in a while, so I thought I’d blather a bit about what I’m up to.

I can has focus?

I lamented on twitter not long ago that my lack of creative focus probably severely decreases my chance of making significant (money-making) progress in my creative endeavors. Rectifying this is easier said than done. My creative interests include writing fiction (fantasy mostly), composing music, and programming (programming stuff I’m interested in, that is, not freelance work, which is boring). I’m guessing that making decent progress in one area (the sort of progress that would lead to substantial income) likely necessitates giving up the other two for at least some extended period of time. Each creative endeavor includes its own pros and cons in terms the money-making challenges it presents. In fact, let’s make a quick graph as we reflect on what these pros and cons might be…

So which endeavor to choose? I’m leaning towards music, but whichever I choose (if I’m even able to do so), it will be a torture to totally give up the other two, even if it’s only temporarily.

I haven’t done any significant writing in a good long while. I’ve completely plotted several stories, and I’ve written several opening chapters, but I keep getting bored and abandoning projects. One could easily chide, “You’re supposed to stick with it, even if it’s boring!” Pshaw, I say unto you! In my opinion, if writing something is boring, then it’s a good sign you shouldn’t be writing it in the first place. Being bored completely defeats the purpose of such a creative act. If you’re bored writing it, why should a reader have any interest in it?

I kept thinking my getting bored had something to do with finding the right personal balance between plotting and pantsing, but as I reflect on why writing SON OF A DARK WIZARD managed to work for me, I believe it has more to do with how interesting I find the characters. Sorren in SON OF A DARK WIZARD, who was an arrogant brat wizard, was just insanely fun to write. So with whatever I write next, I really need to focus on making the character as interesting (for me) as possible. Of course, it’s not necessarily easy to do that. It managed to fall into place quite well for Sorren, but it isn’t obvious to me how to make a more virtuous character deeper than cardboard. Anyway, it’s something I’ll have to think more about before beginning a new draft. I have several more story ideas that I’m eager to get working on, but I want to make sure the main character really comes alive for me before I dive in.

Also, since I really don’t have much of an audience yet, I was thinking of posting my next story for free (at least temporarily) on Wattpad as I write it. That might not help much in building an audience, but it feels better than just sitting on it until I indie-pub the book. By the way, although the sequel to SON OF A DARK WIZARD has been mostly plotted for a couple years now, I don’t have the funds to pay for another cover at the level of professionalism of the first book’s cover, and I really don’t want to publish it with a cover of inconsistent quality, hence why I’m holding off on working on the sequel for now. (If you’d like to donate, let’s say, $2,000 for a cover, I’ll happily get to work on it and dedicate the book to you.)

I’ve got several tracks in the works, and I know that I owe my Patreon subscribers 12 tracks for the six months they’ve been charged without me delivering anything! (I’ve been trying to pause donations each month, but I sometimes forget.) I am definitely committed to delivering these tracks, though as usual I can’t promise when. Life just feels very hectic right now and I don’t seem to be in a position to set a good schedule for myself, much less follow it with any amount of discipline. (This is also a deterrent to my inability to make progress in my competing creative endeavors, but one that I’m not sure I can do much about at the moment; I would need the support of other family members, and unfortunately I don’t think I’m in a position to request or enforce that.)

I’m still working on that more user-friendly MIDI animator that I blogged about earlier this year; I kinda wanna finish this, at least to some degree, before I get back to composing.

Other than that, I’ve been particularly interested in math lately for some unknown reason. More specifically, I’m fascinated by the human “creation” of math. That is, how do we as humans psychologically come up with math? Euler’s formula, along with the entire idea of complex numbers (imaginary numbers), are particularly fascinating. I understand how to work with them and all that; I understand the concept. What I don’t understand is: how did Euler and mathematicians of old even come up with this concept? It doesn’t feel at all intuitive. If you think about it, Euler’s formula is an implication of the definition of complex numbers more than a “discovery”, but how did mathematicians come up with this “rotational” definition of raising numbers to the power of complex numbers? It boggles my mind. And what does it mean? That is, it’s obvious what most numbers mean even without a context, such as 2 or -3. But what does i mean? (Beyond merely sqrt(-1), which is obvious.) I’m not sure. Yet, it’s useful. Anyway, I yearn to have a deeper understanding of it, and of how mathematicians “create” (or “discover”) math in general.

Well, that’s all for now. Maybe I’ll try blogging a bit more often. I’ve been meaning to for while. I still haven’t posted a “Year’s Best” for 2017. I also hope to post another “composer’s analysis” of the last track I uploaded to YouTube, Moonwish. I’d also like to post about why Cantor’s ideas of magnitudes infinities is useless and wrong, my new(ish) understanding of the second law of thermodynamics (I think “disorder” is the wrong word, for those definitions that use it), and some interesting thoughts about DNA… but all that for another day. Later, my dear readers.