I’ve recently been reading David Cope’s Virtual Music, a book about his computer program which composes music by analyzing and reassembling music by other composers. I remember hearing about his work years ago, but for some reason I’m just now getting into it… (I’ve been missing out!) I’m not sure if he has the program (called EMI, for Experiments in Musical Intelligents) on the CD of one of his books, but as it would require a Mac anyway, there’s no way I could fool around with it. 🙁 I guess I’ll just have to get a Mac! Well, that won’t happen anytime soon… maybe in a few years.

Somewhere in the book someone mentions something like “computer story understanding.” Huh? I had never heard of that before. So I did some searching and found that there is in fact this whole branch (well, maybe not “branch”, but “area”) of AI dealing with the quest to program computers to write stories…!! Unfortunately there don’t seem to be any recent books on the subject, but I might look into that subject after I finish Cope’s book. 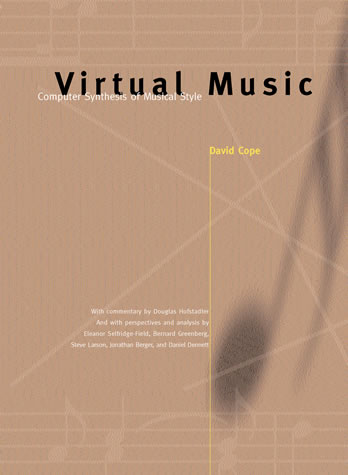 As a joke, I opened an online store at CafePress selling a bunch of overpriced items with a quote I wrote:

The nature of hierarchal breakdown is negatively conditioned to supervene on entity distension, and its husbanding requisitions yielding variances to indulge entity macrocosms.

The quote does mean something obvious, but of course it is written to be as cryptic and confusing as possible, so cryptic that it probably has several meanings. Can you guess what it means? (Don’t expect a prize if you can.)

The joke was inspired by a particularly hilarious thread in a forum, a thread which began as a discussion of this video from YouTube:

I can hardly do anything on Mondays because I’m in classes all day. I woke up, did some homework, drove to college, had 9 hours of mostly boring classes, drove home, blah blah blah, you get the point. I don’t even have time to write this blog. 🙁 But I will anyway.

I picked up some more books at the library today (that I probably won’t have time to read) by David Cope. One is Vritual Music, which will probably make me not like Douglas Hofstadter even more… and Techniques of Contemporary Composers or something… I mostly want to read what he has to say about chromaticism.

On the way to college today I was listening to the classical music radio when I heard a theme by Mozart. It sounded wonderful, but I didn’t remember Mozart ever seeming so romantic (as in the “Romantic” period… Romanticism). His orchestration of his theme was just unlike anything he had ever done, what a genius he was! Then when it ended the radio lady said it was Variations on a Theme by Mozart by Chopin. Aha! Chopin and Mozart, you tricksters! It was quite a beautiful piece, unfortunately my college didn’t seem to have a copy at the library… I’ll have to ask them to order it! (Eventually!)

Firstly, I want to test the embedding of one of these customized embedded YouTube players…

I had a strange dream last night in which my book-in-progress, The Game of Gynwig, was finished and published. I was holding the book, flipping through its pages, and remembering plot points that don’t exist. (Two nights ago I had an even stranger dream in which hippos wanted to eat me and I had to fight them with swords.)

Today I mostly worked on some Flash animations for a new online educational music course regarding Jazz. The work is tedious and time consuming, but the end is near (I think) and it should be online before the year is out, so look forward to it!

I can finally blog again! I went weeks without the Internet, then I had midterms and a cold and many emails to catch up on, but now things are finally settling back to chaos.

I’ve been reading a short biography of Mahler. Although I love his music, he doesn’t seem like the kind of guy I’d get along with… he seems very prideful, and not in the honest Roark kind of way, but in the bloated and wrong Toohey way. I’m about half-way through the book.

The other day I bought three books (bound as one) by Alexandre Dumas: The Three Musketeers, The Count of Montecristo, and The Man in the Iron Mask. I was mostly interested in the books because of how good the stories seem in the movies, and the collection was a mere $13. That price for 1400 pages of fiction sounds good to me!

I finished writing my Opus 40, “The King’s Assassin”, but I still have some orchestrational editing to do. However, that will have to wait since I must now focus my musical energy on an orchestration of The Cornish Wassail for a Christmas CD. I started working on it a while ago, but I’m seriously considering scrapping my work on it thus far (I was almost about half way done) and starting anew with a different… “outlook” I suppose you could say. What I have now isn’t really bad, but it sounds too simple orchestrationally. It needs more umph. More power. Orchestrating is hard!

The preview for Sweeney Todd is out! It looks like fun, but I’d rather Sweeney and his world didn’t seem so dark on the outside. I think Sweeney is more of a normal looking man with inside darkness. He shouldn’t look like a crazy murderer on the outside. He’s not supposed to be that kind of crazy. Oh well, I still look forward to it. What do you think?

Argh!! We’ve no Internet connection yet in the new house. (I’m on a computer at the local library.) This morning the phone company (Verizon) said it will probably be at least another week before our high-speed access comes through. Another week without the Internet?! How will I live? I’m experiencing extreme withdrawal. 🙁 (And they might be lying about “another week”, it might be longer since they first said “2 to 3 days” which was wrong.)

I’m almost finished another piece of music which I’m thinking about calling “The King’s Assassin”… it’s an orchestral piece that uses a drum kit and sounds a bit James Bondish at times. I’ve also got a 9 minute lullaby called “Guinevere” that just needs dynamics editing… if I ever get around to that. It’ll probably be at least a week before I can post them, since I… have no Internet!

Ugh… Mondays are so long…

It’s a new month, October! I don’t dislike winter, but I hate fall. It gets too dark and too cold too early in the day. Spring is probably the best season though…

Anyway, my family and I have now moved into a new house… it’s much bigger, and there’s a lot more room, especially since much of our stuff is still in boxes. Actually, I should pull out our video camera and film a short tour of the house, since it won’t take long for the place to become… “populated”. Unfortunately I think our video camera is in a box somewhere. I guess I could take a bunch of digital pictures. This might just be the biggest house I’ll ever live in, though that is unlikely considering how rich I will inevitably become.

I’m almost finished reading The Case Against Adolescence. Perhaps I am so easily able to accept the ideas and conclusions of the book because I was “adolescent” not so long ago; my “teen years” are fresh in my mind. And I came to some of the conclusions the author does on my own, though without the research or science or even historical context the book gives, which only strengthens my opinions. However, I haven’t completely finished reading the book, and I’ll dedicate an entire blog post to the subject when I do. If you’re a teenager, regularly interact with teens, or plan on parenting teens some day, you should definitely read it; it may change your perspective and your actions (or so I hope).