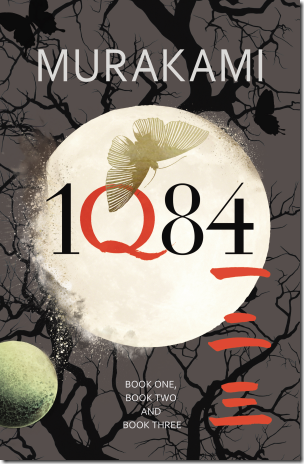 Summary: When a writer accepts the task of ghost-editing a strange story for a writing competition, he ends up thrusting himself into a strange and mysterious world in which a religious cult wants him dead, the story’s strange original writer insists on living with him, and the story he rewrote which he thought was only a bizarre fantasy begins to reveal itself as true.  The reality of the world does not seem to be what he thought.

Thoughts: While the fairy-tale-like strangeness of the story kept me reading, and reading, and reading (for 900-something pages of weirdness), ultimately the story leaves a bunch of things unexplained or open-ended, leaving me as the reader rather unimpressed.  The story also features a bunch of really weird dirtiness which adds nothing to the story.  The author also likes to over-describe almost everything, adding in a bunch of details that don’t matter at all.  Things like: “The dog liked to eat spinach for some reason.” and “He woke up and drank a glass of milk.  Then he sat down at the table with a piece of toast and ate it while reading the newspaper.”  Blah, blah, blah, who cares?  I guess it’s a style decision that may work better for some readers than it does for me.  I’d prefer the story to move along.  I have a good enough imagination that if I want a bunch of useless details, I can make them up on my own, thank you very much.  Anyway, I’d like to check out more of the author’s work, because this book did feature some wonderful and poetic moments that really got me excited.  But the overall story failed to live up to anything special for me.