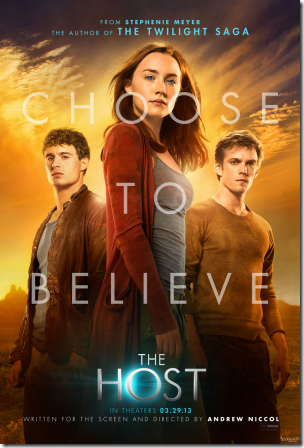 Summary: After an alien invasion, an alien tries to take over a teenage girl’s body, but the girl’s mind fights back and they end up sharing the body.  The girl forces the alien to find her loved ones, rebels who are resisting the invasion and hiding in the desert.  Meanwhile, the alien develops a love interest of her own, because apparently being a 1,000 year old alien is very similar to being a teenage girl.

Thoughts: I wanted to check this out as it was directed by Andrew Niccol, who wrote and directed Gattaca and In Time, and wrote The Truman Show, all of which I enjoyed.  Would he be able to turn something by Stephanie Meyer into an enjoyable sci-fi?  The answer is a resounding NO.  This film was awful.  I could’ve forgiven the stupid girly romance nonsense if it had created any interesting conflict, or made any sense in the first place.  (Why is such an old alien falling in love with a random earth dude?)  Instead, the conflict is just “oh no, the human part of me loves this guy, and the alien part of me loves this other guy, I guess I should just make out with both of them!”  For example, what if she was forced to save only one or the other?  That would’ve been interesting.  But no twists like that are explored.

Secondly, the aliens made no sense.  They’re at first portrayed as these morally elite beings who don’t believe in lying or cheating or stealing or killing, yet they have no problem killing most humans by taking over their bodies.  No explanation is given as to why they think this is perfectly morally OK, yet strongly oppose the rest of humanity’s moral weaknesses.

Thirdly, we’ve got what Blake Snyder would call “double mumbo jumbo” — that is, more than one crazy thing the audience has to accept.  First we have to accept that aliens have invaded and have taken over human bodies.  OK, we can go along with that for the sake of a story.  But then we learn that the rebels are hiding in this huge bigger-than-a-mansion desert cave, where they have electricity, water, a huge farm powered with giant mirrors, a medical room, room for vehicles, and a room for clap-off lightning bugs that seem to exist only to look cool and romantic.  It’s just ridiculously far-fetched.  We are told that there is only one secret entrance to the place, yet sunlight is pouring in throughout the place, lighting all the rooms and halls.  Only one entrance?  The place is full of holes!

Fourthly, how incredibly dumb do you have to be to accidentally slice your leg while reaping crops? 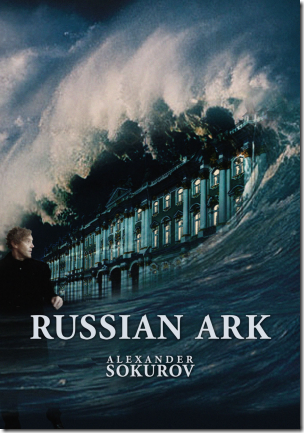 Summary: A 90-minute film made entirely in one long take.  The camera follows a ghost or spirit as he wanders around the Hermitage museum (and through different time periods, from the 1700-somethings to modern day) in Saint Petersburg, Russia, now and then stopping to talk to people who can see him and making philosophical observations.

Thoughts: Some parts were interesting and poetic, but overall, without a real overarching plot (which I suppose would’ve been very risky since they were filming the entire thing in one take), it was rather meandering and I found myself phasing out every now and then. 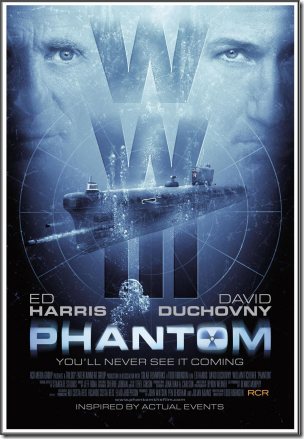 Summary: Based on the true story of a Soviet submarine that sank after it mysteriously went rogue and tried to fire a missile near the US, the movie tells the story of a submarine captain who battles against rogue Soviets who are trying to start a war between the US and China.

Thoughts: Here’s a good example of what happens when filmmakers don’t seem to know their Blake Snyder beats and get the pacing all weird.  What should’ve only been the midpoint event comes way too late and is actually the climax, making it seem as if the problem was really not that hard to solve.  Pretty bland film. 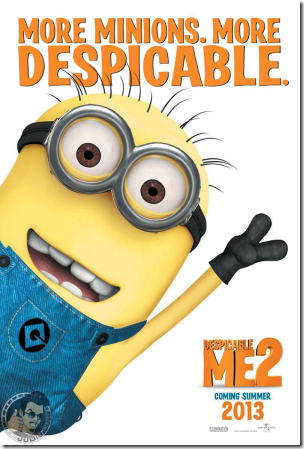 Thoughts: A worthy sequel to the first Despicable Me.  The story is a bit cliché (characters always seem to start finding love interests in sequels), but it makes up for it in its over-the-top cartoony comedy, which I very much enjoyed.  Fun movie. 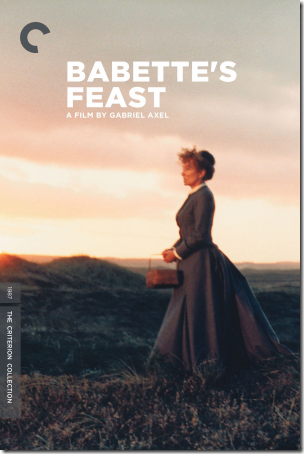 Summary: When her family is killed, a French woman flees the country to Denmark, where she is taken in by two old religious ladies in a small village.  Her only hope of returning to her home country is if she wins the lottery, which she does.  But before she leaves, she has one last request: to cook a rich extravagant feast for the small village, which perhaps might change their spirits.

Thoughts: A very slow-paced film, but it works rather well.  The premise reminded me a bit of Ratatouille, as Babette views cooking as an art.  In Ratatouille, the cooking plays a minor role in a larger plot, so the cooking scenes themselves are rather rapid, usually presented in quick musical montages.  In Babette’s Feast, the delicacy of food preparation is given much more time to linger on screen, so you can see just how much attention and patience goes into the chef’s artwork.  It forces one to think: is this extravagant meal being wasted on this small village?  After all, they don’t have the experience to appreciate the mastery of the food they’re eating.  It says some very interesting things about an artist’s love for his (or her) art, as well as his relationship with his audience.  Great film.