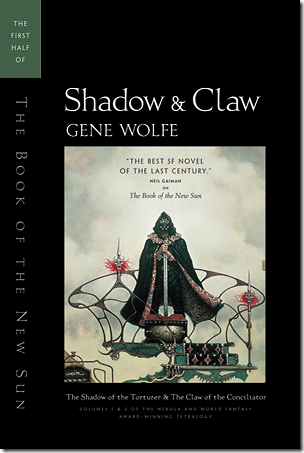 Lately I’ve been reading Gene Wolfe’s book Shadow & Claw: The First Half of ‘The Book of the New Sun’

, which is comprised of the first two volumes of his tetralogy The Book of the New Sun (The Shadow of the Torturer and The Claw of the Conciliator).

I’m still reading, but here are a few excerpts I thought were interesting:

“When I am free,” she said, “I shall found my own sect.  I will tell everyone that its wisdom was revealed to me during my sojourn among the torturers.  They’ll listen to that.”

I asked what her teachings would be.

“That there is no agathodaemon or afterlife.  That the mind is extinguished in death as in sleep, yet more so.”

“But who will you say revealed that to you?”

She shook her head, then rested her pointed chin upon one hand, a pose that showed off the graceful line of her neck admirably.  “I haven’t decided yet.  An angel of ice, perhaps.  Or a ghost.  Which do you think best?”

“Isn’t there a contradiction in that?”

“Precisely.”  Her voice was rich with the pleasure the question gave her.  “In that contradiction will reside the appeal of this new belief.  One can’t found a novel theology on Nothing, and nothing is so secure a foundation as a contradiction.  Look at the great success of the past—they say their deities are the masters of all the universes, and yet that they require grandmothers to defend them, as if they were children frightened by poultry.  Or that the authority that punishes no one while there exists a chance for reformation will punish everyone when there is no possibility anyone will become the better for it.”

The three meanings of everything

“The brown book is a collection of the myths of the past, and it has a section listing all the keys of the universe—all the things people have said were The Secret after they had talked to mystagogues on far worlds or studied the popul vuh of the magicians, or fasted in the trunks of holy trees.  Thecla and I used to read them and talk about them, and one of them was that everything, whatever happens, has three meanings.  The first is its practical meaning, what the book calls, ‘the thing the plowman sees.’  The cow has taken a mouthful of grass, and it is real grass, and a real cow—that meaning is as important and as true as either of the others.  The second is the reflection of the world about it.  Every object is in contact with all others, and thus the wise can learn of the others by observing the first.  That might be called the soothsayers’ meaning, because it is the one such people use when they prophesy a fortunate meeting from the tracks of serpents or confirm the outcome of a love affair by putting the elector of one suit atop the patroness of another.”

“And the third meaning?” Dorcas asked.

“The third is the transsubstantial meaning.  Since all objects have their ultimate origin in the Pancreator, and all were set in motion by him, so all must express his will—which is the higher reality.”

“You’re saying that what we saw was a sign.”

I shook my head.  “The book is saying that everything is a sign.  The post of that fence is a sign, and so is the way the tree leans across it.  Some signs may betray the third meaning more readily than others.”

For perhaps a hundred paces we were both silent.  Then Dorcas said, “It seems to me that if what the Chatelaine Thecla’s book says is true, the people have everything backward.  We saw a great structure leap into the air fall to nothing, didn’t we?”

“I only saw it suspended over the city.  Did it leap?”

Dorcas nodded.  I could see the glimmer of her pale hair in the moonlight.  “It seems to me that what you call the third meaning is very clear.  But the second meaning is harder to find, and the first, which ought to be the easiest, is impossible.”

The highest form of governance

“Severian.  Name for me the seven principles of governance.”

“Tolerable.  Of these, which is the earliest form, and which the highest?”

“The development is in the order given, Master,” I said.  “But I do not recall that you ever asked before which was highest.”

Master Malrubius leaned forward, his eyes burning brighter than the coals of the fire.  “Which is highest, Severian?”

“You mean attachment to an abstraction conceived as including the body of electors, other bodies giving rise to them, and numerous other elements, largely ideal?”

“Of what kind, Severian, is your own attachment to the Divine Entity?”

“To the person of the monarch?”

“Yes, because there is no succession.”

“The animal [a dog] that rests beside you now would die for you.  Of what kind is his attachment to you?”

There was no one there.  I sat up.  Malrubius and Triskele [the dog] had vanished, yet my side felt faintly warm.