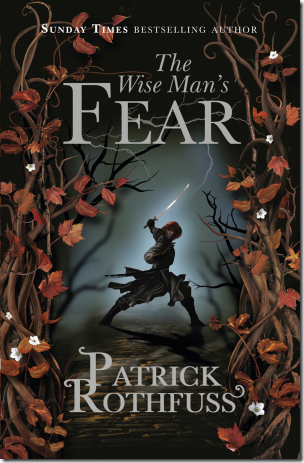 Review: I’m not famous and I have no friends in the industry yet, so I’m still allowed to write bad reviews.

I once blogged: “Overall, I’ll definitely have to read the next books in this trilogy, and perhaps even everything else Rothfuss ends up writing…”

I guess I spoke (well, blogged) too soon. This book had completely the opposite effect: I think I may never read anything by Rothfuss again. Even Rothfuss’s lyrical prose couldn’t save this reader from the dull tediousness of this bloated meandering attempt at storytelling.

And that’s my main annoyance with this book: the storytelling. Though, honestly, I’m not sure I’d even call it “storytelling” because so much of it seemed so arbitrary. I suppose it will work for readers who enjoy the fantastical ideas presented in each pointless “sidequest” digression, but when you don’t enjoy them, their arbitrariness only makes them that much worse. Not only do you not care about the pointless sidequests, but you can’t even take a breath and assure yourself that they’ll have some payoff connected to the main story.

Of course, in this volume, the “main story” was so thin, it was barely there at all. In the first book, the main character was out to find a mysterious group of people called the “Chandrian” who murdered his family. And while that book also featured some major pointless digressions, this book was almost nothing but pointless digressions. What seemed like the driving force of the first book was only given lip service in this sequel, with the main character merely asking, “Do you know anything about the Chandrian?” to new characters now and then. Or, worse, deciding it would be too dangerous to ask at all. It felt like he hardly cared about the Chandrian.

I assure you I have nothing against “episodic” stories, where the narrative seems to focus into distinguishable story arcs. But with this book, I missed any coherent connections between them. It was as if the author brushed aside any concern for the main story so that he could fill the world with random ideas he thought were interesting, with no regard to whether or not they contributed anything to each other, beyond the main character experiencing them.

For me, the worst episode was what I’d call “The Lethani Sidequest.” The main character rather arbitrarily decides to learn a mysterious fighting religion thing called the Lethani. It’s a bit like a Chinese martial art with a focus on something like qi. That is, it’s not just about what you do physically, it’s about your mindset and your worldview, your philosophy. It’s natural for an author to have fun imagining some profound other-worldly philosophy, so, excusing the pointlessness of the sidequest, it at least had potential.

Unfortunately, the secretive community that studies the Lethani made absolutely no natural sense.

Firstly, they had no facial expressions; they communicated their emotions with hand gestures. Sorry, that’s just stupid. It would be one thing if they made it a point to train themselves to not use facial expressions, and maybe that’s what the author was going for, but why then reveal them with hand gestures? Facial expressions are not a cultural phenomenon; there are ingrained in our very nature. They’re innate. You don’t have to learn from experience to associate a smile with happiness.

Secondly, women are portrayed as naturally better at fighting than men, because men get angry too easily and cannot use their natural strength as effectively. That doesn’t make any sense. You might as well say men are naturally better at nurturing children because women get sad too easily.

Thirdly, music is socially forbidden because it’s considered extremely intimate. On the other hand, sexual relations are more open in this community than in any hippie free love commune. Completely unrealistic on both counts, and not even interesting as ideas.

Lastly, in the worst offense of logic, the community does not understand where babies come from at all. There are no such things as fathers because these people are somehow too stupid to connect certain actions with a woman’s pregnancy. Aside from making no sense psychologically (oh, look, he has your eyes, it must be magic!), this would bring about so much half-sibling and cousin incest (that is, inbreeding) through the generations, genetic defects would be common.

I suppose one could claim the narrator is simply being unreliable. Perhaps. But that’s no excuse for being plain unrealistic.

Throughout the story, these “episodes” start turning into tall tales as people pass stories around about our hero, embellishing them as they go, and our hero quickly starts becoming the stuff of legend. But this seems to happen far too easily, and our hero is conveniently always about to overhear the stories and over-appreciate his inflated reputation. I think what annoys me is the dramatic ease with which this happens. It requires no effort on the hero’s part, after all. It’s like trying to show how witty a character is by having others laugh at his otherwise lame jokes. That is, his stories hardly seem the stuff of legend, so what’s the motivation for other characters to inflate them to such a degree? Only that the author wants them to do so for the dramatic affect of it. It comes off as cheesy and unrealistic.

One grand mistake I think Rothfuss made with this series was putting much of it in first person, as a sort of story-within-a-story. First person makes the main character feel too much like another person. This works well for a lot of stories, but when the hero is your sort of good-looking, good-at-everything, wise-and-witty-and-cunning all-around-awesome guy, he comes off as ridiculously pretentious. That said, I do think Rothfuss handled it better in this volume than in the last, but it’s still a major weakness. Certain elements, such as the overly-easy legend spreading, might have worked better if readers were able to place themselves into the character’s shoes more easily.

I’ll admit I still want to know how the story ends. I want to know if the main character finds the Chandrian and has his revenge. And I want to know what Rothfuss has in store for the meta-story, the short story taking place between the narrator’s telling of the main story.

But do I want to know badly enough to endure another thousand pages of sidequests, digressions, unrealistic cultures, and arbitrary philosophical expositions?

Nope. I don’t think so. I’ll settle for a summary.

In the meantime, my copy of The Wise Man’s Fear receives the honor of being the first book I bought new to be weeded from my personal library. Off to a used bookstore it will go. No sense in holding on to this.

(It has my property stamp in it, so when I get famous, it will be a collector’s item. Let me know if you want it for $50. That’s a bargain!)