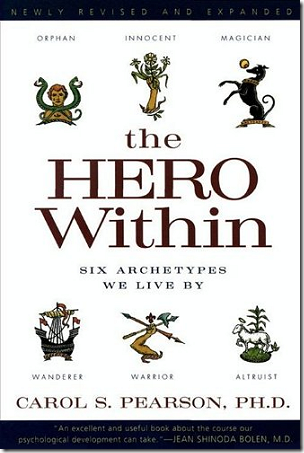 I have begun exploring Jungian archetypes and the role they play in stories.  I am currently rereading Christopher Booker’s The Seven Basic Plots: Why We Tell Stories

, in which Jung and his ideas are mentioned several times.  But what really fascinates me is the analyses author Jeffrey Alan Schechter provides in his screenwriting book My Story Can Beat Up Your Story

I am a huge fan of a book by Carol S. Pearson entitled The Hero Within, which explores the six archetypes that real-life people embody: the Innocent, the Orphan, the Magician, the Wanderer, the Martyr [or Altruist], and the Warrior. …

While discussing Ms. Pearson’s ideas with my good friend Gilbert Maclean Evans, he pointed out that in every film he could thing of the hero moved through four of the six archetypes from opening moment to final fade.  We looked at a bunch of movies and it was true.  Every movie, four archetypes.  And not only does the hero move through these four archetypes, he or she does so like the proverbial Swiss clock.

The four archetypes are: Orphan, Wanderer, Warrior, Martyr.  In every story, the hero moves through these archetypes.  In Act 1, he is an Orphan, spiritually if not literally, detached from family or a solid familial support base.  In Act 2, he begins as a Wanderer, exploring the world that the story’s catalyst brought about.  Half way through Act 2, he becomes a Warrior, fighting for something, again spiritually if not literally.  In Act 3, the hero learns to become a Martyr, trusting in a higher power to achieve what he’s after, unafraid of dying in the process.  (Sometimes the martyrdom beat is played out by a supporting character, providing the hero the necessary “push” to step into this role himself.)

We see this again and again in stories of all sorts.  There’s something about these archetypes and the process of journeying through them that really resonates with us.

So that’s why I’m exploring Jungian archetypes.  I’m interested to see if there are any deeper truths to be found in this area, especially in how they relate to storytelling.

So I started reading Pearson’s The Hero Within: Six Archetypes We Live By

.  It seems to be meant as some sort of psychological self-help book, the idea being that if you can recognize these archetypes within yourself, it will help you understand yourself, solve problems in your life, and find inner strength.  For better or worse, I’m not really taking these self-help messages at face value, but perhaps a human’s love of stories is, on some level, driven by a sense of seeking guidance, not just entertainment.  But guidance in a way that is not as direct and perhaps as upsetting as “this is why you’re wrong about stuff,” thus allowing you to interpret and integrate a story’s message in a way that, for lack of better phrasing, “works for you.”

Anyway, some of this book seems downright ridiculous.  Listing the ways understanding these archetypes can help you, Pearson writes (Pg 29):

[Reason] Seven: Archetypal recognition can help you better understand others and how they see the world.

This seems a rather presumptuous claim, if not self-righteous, especially if it’s in regard to someone you’re in a disagreement with.  Reason eight is similar (Pg 30):

Eight: Understanding the archetypal basis for the ways in which people see the world cannot only make you smarter, but also help you see beyond the unconscious bias scholars and journalists often bring to their work.

So not only will you understand others better, you’ll see their unconscious biases!  This book seems to encourage readers to form delusions.

… if your boss criticizes you nonstop, that may be evidence of the Warrior’s worry that someone may let the team down.  He will stay on your case until he is satisfied that you are smart enough and tough enough to handle things on your own.  This can be particularly annoying if you are a woman or a man of color and the boss is male and white.  It will feel like racism or sexism (which to a lesser or greater degree it is).

Anyway, I’m still curious to know what the author says about the archetypes, but I’m definitely not buying into these notions that they will help you understand other people.  That seems a rather dangerous thing to assume.