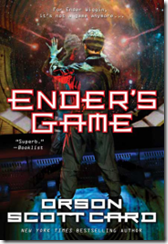 After years, nay, decades of being stuck in development heck, it seems a film version of one of my favorite books of all time, Ender’s Game

, is finally getting the big screen treatment. According to this article:

Summit Entertainment, the production company behind "The Twilight Saga" films, has acquired the rights to the youth-oriented "Ender’s Game" franchise. … The shoot is scheduled to run from February 24, 2012 through June 8, 2012.

To be honest, I’m not holding my breath for the film to be amazing. It certainly has potential, but I think it will be a very tough adaptation. Although it’s sci-fi, and there’s certainly some sci-fi battle action involved, it is not an action adventure story. It is, I think, a drama more than anything else. And if they overdo the action and underplay the social issues, I don’t think it’ll work story-wise. But if they overdo the social issues and underplay the action, it will be a marketing nightmare. The story deals with a "battle school" filled with children, yet it is certainly not a happy Disney-ish or Nickelodeon-ish kids’ adventure, and I hope they don’t try turning it into one, even though that would make it much more marketable.

All that said, I’m excited that it’s finally gotten to this point of development, and I look forward to watching what happens.

I agree with this tentative assessment

It’s been about a year since I’ve done a “movies I watched last month” post… so here’s another! Overall, not that great of a month of movie watching… all films were either average or below Read more…

The trailer for the final installment of the Jurassic World trilogy was recently released! The film at long last reunites the characters Alan Grant, Ellie Sattler, and Ian Malcolm for the first time since the Read more…

I’m a month behind already, so here are the movies I watched this May. Wish I Was Here In this 2014 film written and directed by Zach Braff, an actor struggling to find work decides Read more…