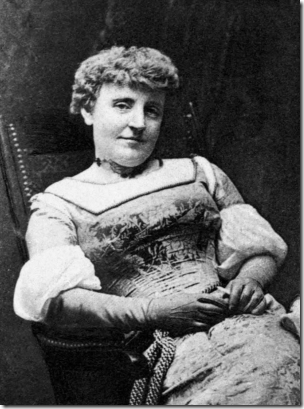 Some random family trivia is that we are related to the famous children’s book author Frances Hodgson Burnett (author of The Secret Garden, Little Lord Fauntleroy).  I was told she was my great great great great aunt.  But is this accurate?  If so, how?  How can it be so?  Is it a direct relation, or through marriage?  No one knew.  (Not that I really asked anyone.)  History became legend and legend became myth and some things that should not have been forgotten were lost.  It was kind of like a secret… a secret garden…

So I registered for a free trial on ancestry.com to investigate the matter and after a few hours of researching and putting all the clues together, I can confirm that the family legends are true.  You see, Frances Hodgson Burnett’s older brother, John George Hodgson, was my great great great grandfather.  According to a biography of Frances Hodgson Burnett, John was a poor drunk, and when he died in 1904, it was my dear rich Aunt Fran who paid for his burial.

John had two children, Edith and Bert.  Interestingly, Bert was a songwriter, which explains why my grandparents had some obscure sheet music he had published in the 1920’s.  At some point, I’ll try orchestrating my great great great uncle’s work to see what it sounds like.  Edith married some guy named Alonzo Miller.  They had three daughters, Nellie, Lucile, and Bertie.  Lucile married John Ashe Hannifin and they had six children, one of whom was my grandfather.

So there you go, from Hodgson to Miller to Hannifin.  Not too complicated.  Also making the research easy was the fact that each generation between me and John Hodgson was born and lived in Knoxville, Tennessee, where the Hodgson family emigrated to from England in the 1860’s.

Thanks! It’s always been a fun piece of trivia in the family, but it’s nice to actually find the exact connections.

I mentioned my 3x great uncle Bert Hodgson (1887-1965) some years ago after finally finding a couple of his songs on YouTube. Well, I found a couple more! Here are modern covers of his songs Read more…

Read an article somewhere that said Tony Shalhoub was recovering from COVID and couldn’t help being shocked, shocked! that Mr. Monk would allow such a thing to happen. But I thought this little skit featuring Monk Read more…

I mentioned my 3x great uncle Bert Hodgson a while back. I thought it was interesting that he was a songwriter, since he’s the only other composer I know of in my immediate lineage (that Read more…