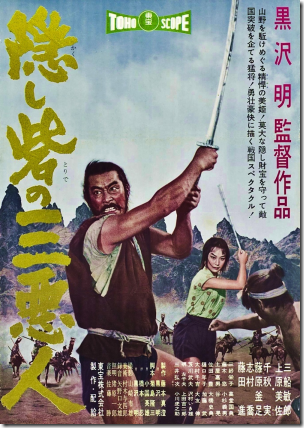 Summary: Fancying themselves bounty hunters, two friends search for a missing princess, hoping to collect the bountiful reward offered for her capture.  But the bumbling greedy fools only end up aiding the small team secretly trying to save her.

Thoughts: A very enjoyable film, definitely one of Kurosawa’s more accessible and adventurous works.  His camera work for the wide screen is a visual feast.  I thought the film’s one weakness was its pacing; certain sequences in the second half simply go on for too long.  Toshiro Mifune’s spear-fighting sequence was engaging, but some of the following sequences dragged on a bit too long.  Perhaps the ending just needed too many plot points to occur to make it appropriately dramatic.  At least it’s nothing like the long final sequence of Kagemusha, eh?  Still, it’s a fun film.

Trivia: On the blu-ray’s bonus features, George Lucas says that it was this film that gave him the idea to center Star Wars around two comic-relief characters, in his case a pair of droids.