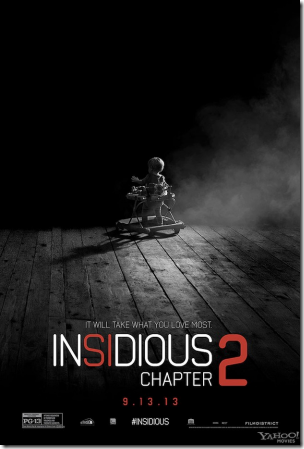 Summary: Starting where the first Insidious film left off, a family deals with setting things right after a father becomes possessed by an evil ghost intent on killing the family.

Thoughts: I enjoyed this sequel more than its predecessor.  While the premise is still rather ridiculous, this chapter seems to take itself less seriously and just has horror-film fun with a collection of creepy situations and jump scares.  Best watched at night in complete darkness.  Director James Wan really knows how to edit and pace a good jump.  Like The Conjuring, seasoned horror film fans probably won’t find anything special here, and may even be disappointed with how un-seriously this film takes itself, but it’s the self-conscious humor of this sequel that I really enjoyed.  And while the overall premise is kind of silly for a horror film, I still like the idea of ghosts threatening to take over your body during sleep.  Fun movie.