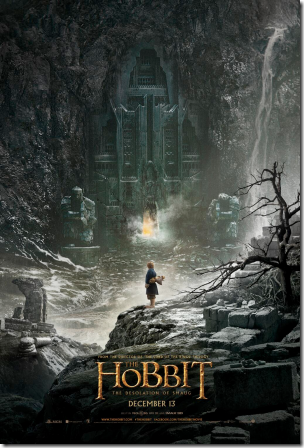 Link: The Hobbit: The Desolation of Smaug

Summary: Bilbo Baggins continues his journey with the dwarves to the Misty Mountains to reclaim their home.  In the process, they’ll have to escape orcs, angry citizens of Laketown, and the ferocious dragon Smaug.

Thoughts: I thought this was great film, even better than the first Hobbit film from last year.  I must admit, I never finished the book.  I only got about half-way through it and then moved on and never went back to it.  That was in middle school.  I think Harry Potter came out in the US the next year.  Anyway, the point is, I am not a Tolkien purist who would get upset by how much of the story was fabricated for the film.  I thought they did a great job with what they created.  It did feel a bit modern; I can’t imagine Tolkien creating a character like Tauriel.  But she worked for the purposes of the film, and I loved the look and feel of the new elven home we get to see in this installment.  I also thought Laketown looked wonderful, though I’ll admit that I didn’t think Stephen Fry worked very well as the master of Laketown.  He just seems too worldly and modern to be in a fantasy film like this.

The dragon Smaug was fantastic.  He looked epic in 3D on the big screen; I loved pretty much every Smaug scene.

The film is almost three hours, but the time really flew by; the film was captivating throughout.  Great film.