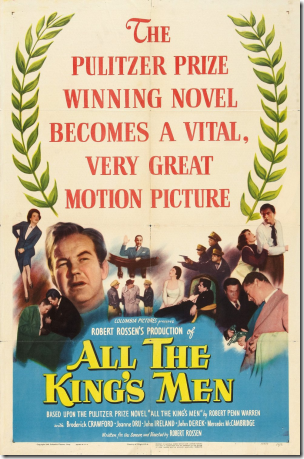 Link: All the King’s Men

Summary: A humble and honest man runs for governor to help his fellow men, but discovers the only way to win and get what he wants is to become the sort of power-hungry swindling politician he loathed at the beginning.

Thoughts: A bit of a Citizen Kane sort of story, but much more bland.  Really, not a very interesting film.  It could’ve been a short story, but instead is drawn out to an almost two hour film.  The guy’s change from a humble and honest man to an evil politician is neither believable nor subtle.  In one scene, he’s good, and then BOOM, he becomes evil, as if it’s just one simple arbitrary choice, and spends the rest of the film being evil.  And we get it right away.  OK, he’s evil now.  But no, the film pounds it in your face.  “Look!  Look, he’s evil now!  Do you see?  Here, let me give you another example by dragging on the story for another half an hour with this subplot, because look how evil he is!”  Boring film.  I can appreciate the overall theme they were going for, but they fail.