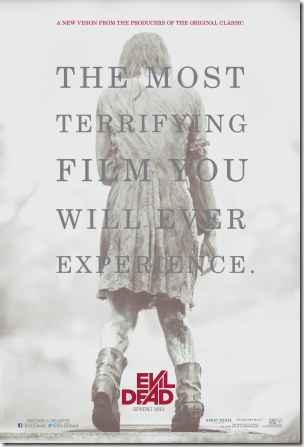 Summary: A remake of the classic 1981 film, which I’ve never seen.  A young girl and a group of her friends retreat to a secluded cabin out in the woods, where she hopes to finally quit the deadly drugs she’s addicted to.  But when one of her friends reads from a mysterious book he finds in the basement, they all find themselves battling each other as demons take over their bodies.

Thoughts: Less of a horror movie and more of a ridiculous gore-fest, in which the goal seems to be not to horrify or scare viewers, but disgust them.  The only moments that felt genuinely creepy to me were the mirror scenes.  Because mirrors in the dark are very creepy.  The film did, however, feature a fantastically creepy musical score worthy of the horror film it could’ve been.  I love the sirens in the score; I don’t know why those are so effective at sounding terrifying, but they are.  Bruce Campbell makes a surprise appearance at the end of the film, doing nothing.  OK, thanks for that.