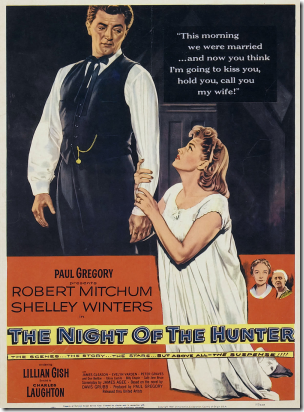 Link: The Night of the Hunter

Summary: A serial killer pretends to fall in love with a woman in an effort to get her children to tell him where their late father hid a large stash of stolen money.

Thoughts: This was supposed to be a classic crime thriller.  Unfortunately, it does not stand the test of time, if it was ever thrilling at all.  The serial killer, rather than being creepy and manipulative, is far too unsubtle; he basically confronts the kids directly, “Where’s the money?” and then plays nice when other adults around.  That’s neither thrilling nor realistic.  The acting was terrible with everyone over-exaggerating their expressions, and the writing comes off as very scripted, complete with people looking off into the distance and talking to themselves.  I hate when people talk to themselves.  Overall, not impressed with this one.  Not sure why it became a classic.  One thing did work for me, though: the use of character singing as background music, especially when the youngest child sings as she and her brother float down the river, was very creepy.  It didn’t really go with the atmosphere of the rest of the film, and it was obvious her voice was dubbed, but there was something very creepy about it.